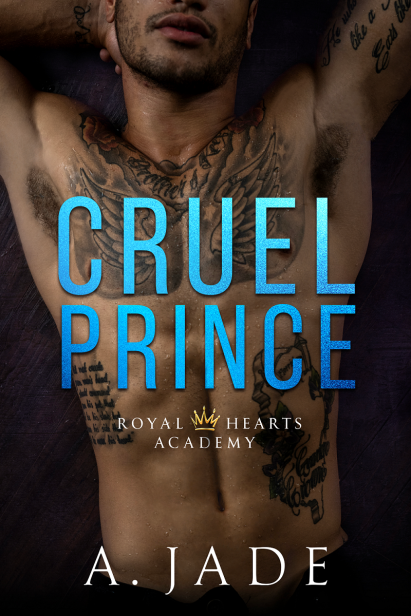 Welcome to their kingdom…

But four years later, here I am…back to finish my senior year at Royal Hearts Academy.

And forced to face Jace Covington.

The one I left behind.

Only—he isn’t the same boy I gave my heart to.

This new Jace is as cruel as he is gorgeous.

And he’s determined to make my life a living hell.

Along with the rest of his glorified family and crew of tyrants.

They expect me to worship the ground they walk on like everyone else, but I’d rather eat dirt.

If Jace Covington wants me gone…he’ll have to try harder.

Because I’ve never been the kind of girl to play by the rules.

WARNING: Royal Hearts Academy is a New Adult/High School series of standalones filled with drama, a touch of angst, and boys who are bad to the bone.

This series is recommended for mature readers due to graphic language and sexual content.

Thanks to another Post-it note from Aunt Crystal, I was able to figure out which guest bedroom she cleared out for me.

Although cleared out is a bit of an understatement. Aside from the queen-sized bed covered with a purple bedspread, an empty bureau, and yet another Post-it note promising to take me shopping later in the week…the room is bare bones.

Not that I mind. I managed to stuff my entire life into one duffle bag and a medium suitcase. No-frills suits me.

Less shit to get attached to.

I open the closet door to hang up some of my clothes, but three plaid skirts, three crisp, white button-down shirts, and three navy blazers snag my attention instead.

The Royal Hearts Academy emblem above the left breast pockets practically taunts me.

I wasn’t in a position to make any requests considering my aunt and her husband were nice enough to take in a stray—but the one thing I insisted on was attending the local public school instead of Royal Hearts Academy. My dad forced me to go to private school for elementary and junior high and it was one of the worst experiences of my life.

The organ in my chest squeezes. With the exception of meeting Jace.

Of course, the one thing I wanted was the one thing Crystal’s husband wasn’t willing to negotiate on given it’s my cousin’s—technically, step-cousin’s—senior year and he attends RHA.

Wayne thinks it would be beneficial for me to go to school with his son Oakley, so I’ll have someone to show me the ropes.

However, it’s clear good ol’ Uncle Wayne must not be very observant. I only met him once briefly at my aunt’s wedding four years ago, but a quick scroll through Oakley’s Instagram suggests he’s about as useful as a goldfish at a Bob Marley concert.

And by useful? I mean, stoned.

Which probably explains why he didn’t pick me up from the airport like he was supposed to, or why I still haven’t seen any signs of him…despite being here all afternoon and most of the evening.

I send him another text, but just like the first ten I sent today, he doesn’t respond.

Curiosity getting the best of me, I slip out the door of my new room and venture down the long hallway. My aunt said there were six bedrooms in the house—but after knocking on several doors, it’s obvious Oakley isn’t in any of them.

Stifling a groan, I amble down the staircase and wander into the kitchen. Much like the rest of the house, the kitchen is spacious, and everything looks expensive, but price aside, it’s pretty standard. Stainless steel appliances, glass table, large granite island in the center.

After checking the living room, my uncle Wayne’s office, and the bathroom on the first floor, I make my way down the stairs leading to the basement.

The smell of marijuana infiltrates my nostrils almost immediately.

I’m not a buzzkill, I have no issues with people who smoke—what I have an issue with is people who indulge so much they forget the important stuff.

Like answering text messages or picking their step-cousin up at the airport.

The big screen television—which is currently broadcasting two naked girls grinding against one another to awful mumble rap—illuminates the basement enough I’m able to see the back of a leather couch. The smoke wafting toward the ceiling fan tells me there’s a good chance I’ll find Oakley on the other side of it.

I don’t know whether to laugh or shake my head as I round the corner and see him passed out with one hand down his pants and the other holding what appears to be a partially smoked blunt.

The baseball cap he’s wearing hides most of his face, but he definitely looks like he’s been asleep for a while. How the house hasn’t burnt down is anyone’s guess.

I’m about to dispose of the still lit blunt and go back upstairs…but then he speaks.

Uh. Kind of weird, but considering I’ve been called worse by strangers, I decide to roll with it.

“I was wondering when you’d get here,” he murmurs, his voice thick with sleep.

I tamp down the urge to tell him I would have been here sooner if he picked me up from the goddamn airport like he was supposed to.

We’re going to be stuck together for the next year and bitching at him isn’t a good way to start a relationship.

I open my mouth to ask if he wants to grab a bite to eat later, but he speaks again.

Before I can finish that sentence, he shoves his sweatpants down and…

Bile works up my throat as he wraps his hand around his exposed dick.

“Come on, beautiful,” he groans. “Quit teasing me and sit on it.”

I’m positive I must have a contact high because that’s the only way to explain why the actual fuck my step-cousin is summoning me to sit on his penis.

“Gross. What is wrong with you?”

Shielding my vision with my hands, I proceed to back away. Unfortunately, I knock into the coffee table so hard I see stars.

Talk about stating the obvious.

“No shit, Sherlock.” I make the huge mistake of looking up. “Oh, my God, dude. Can you please put your wiener away?”

“Sure thing,” the pervert says, rising from the couch. “As soon as you tell me who the hell you are and why you’re in my house.”

He has got to be kidding me.

He tilts his head to the side, like he’s having trouble understanding why my name would have any significance to him.

“Your cousin,” I grit through my teeth and he blanches.

I breathe a sigh of relief as he pulls up his pants.

“You’re not supposed to be here until Saturday.”

“It is Saturday,” I inform him, and his eyes widen.

“Well, shit.” He places the blunt between his lips and inhales. “This stuff is better than I thought.” Coughing, he holds it out to me. “Want some?”

I give him a sardonic smile. “I appreciate the peace offering and all, but I’ll pass.”

He doesn’t look offended in the least. “That’s cool.” His expression turns serious as he snuffs the cherry of the blunt on a can of soda. “Look, I’d appreciate it if you didn’t tell the parental units I tried to bang you, okay? They’re on my case enough lately.”

Oakley doesn’t have to worry. I won’t be telling anyone he tried to bang me.

I give him a nod.

And then it’s nothing but uncomfortable silence.

Quite the riveting exchange we’re having here.

“It’s Saturday night,” he declares unexpectedly while stretching his arms over his head and yawning. “Christian’s throwing his big end of summer party before school starts.”

I don’t know who Christian is, but I wouldn’t mind going to a party. In fact, meeting a few people and reconnecting with some old friends before school starts will probably make things easier for me on Monday.

My heart does a little flip. Maybe Jace will be there.

There are so many things I want to tell him.

And even more things I want to ask him.

Like why he blocked my number. Or why he never returned any of the dozens of messages I sent him on social media after I left.

“A party sounds like fun. I can be rea—”

“Don’t wait up,” Oakley utters, brushing past me.

Well, that settles that then. My cousin is a bigger tool than the one contained in his pants.

“By the way,” he calls out from the stairs. “The school admins are assholes. I doubt they’ll let you keep that blue crap in your hair.”

A smile touches my lips. I hope they hate my blue hair so much they refuse admission and I have no choice but to attend Royal Manor High instead.

Welcome to their kingdom…

But five years later, here I am…back to finish my senior year at Royal Hearts Academy.

And forced to face Jace Covington.

The one I left behind.

Only—he isn’t the same boy I gave my heart to.

This new Jace is as cruel as he is gorgeous.

And he’s determined to make my life a living hell.

Along with the rest of his glorified family and crew of tyrants.

They expect me to worship the ground they walk on like everyone else, but I’d rather eat dirt.

If Jace Covington wants me gone…he’ll have to try harder.

Because I’ve never been the kind of girl to play by the rules.

WARNING: Royal Hearts Academy is a New Adult/High School series of standalones filled with drama, a touch of angst, and boys who are bad to the bone.

This series is recommended for mature readers due to graphic language and sexual content.