Here are a few books I’m so excited to read this month!

I have an ARC of this, and can’t wait to start reading it!

1: Admit to being powerless over your attraction to the wrong type of guy. (Like Lincoln Wells, who broke your heart after an unforgettable one-night stand.)
2: Believe Mr. Right is out there.
3: Take inventory of past mistakes. (See step #1.)
4: Make a list of qualities you want in a man. (Avoid charming baseball players/reason you made these rules in the first place)
5: Take charge of your own life.
6: Learn to love yourself.
7: Sort the hookup guys from the relationship guys. (Avoid a painful brushoff after an amazing night together.)
8: Never, ever settle. (Even if the chemistry is off-the-charts.)
9: Don’t believe you can change a guy. (Once a commitment-phobe, always a commitment-phobe)
10: Communicate your needs.
11: Open your heart & love fully. (Still working on this one…)
12: Don’t ever, ever stray from the steps. 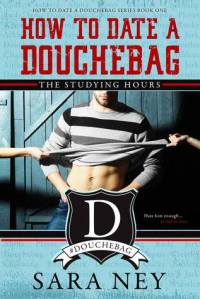 How to Date A Douchebag: The Studying Hours by Sara Ney- September 13th

CRUDE. ARROGANT. A**HOLE.
No doubt about it, Sebastian ‘Oz’ Osborne is the university’s most celebrated student athlete—and possibly the biggest douchebag. A walking, talking cliché, he has a filthy mouth, a fantastic body, and doesn’t give a sh*t about what you or anyone else thinks.

SMART. CLASSY. CONSERVATIVE.
Make no mistake, Jameson Clarke may be the university’s most diligent student—but she is no prude. Spending most of her time in the hallowed halls of the library, James is wary of pervs, jocks, and douchebags—and Oz Osborne is all three.

She’s smart, sarcastic—and not what he expected.

…EVERY DOUCHBAG HAS HIS WEAKNESS.

It’s the end of summer. Just before I start senior year with my two best friends in the whole world. Dustin and Emily are everything to me. We’ve been inseparable since middle school, and when we’re together, nothing can go wrong.

But things aren’t always what they seem. Em’s turned into a drunken mess who parties too much. Dustin and I have hooked up a few times—and now he’s ready to take our relationship to the next level. Yet I’m not sure I want things to change. I’m scared if I take it any further with Dustin, our friendship will be ruined forever. Then there’s Ryan. The new guy. He’s hot. He flirts way too much. And Em has totally set her sights on him.

So when my best friend betrays me in the worst possible way, guess who’s there to help me pick up the pieces of my broken heart? Ryan. But he’s so confusing. Annoying. Sweet. Sexy. I want to trust him, yet he makes it so hard. What I really want is for everything to go back to the way it was before.

Before I found out that best friends make the worst kind of enemies.

My Song For You by Stina Lindenblatt- September 6th

I read an ARC of this and loved it! See my review.

At twenty-one, Jared Leigh had been prepared to give up the life of a touring musician to be a father after getting his girlfriend pregnant. When she told him that she’d gotten an abortion, Jared was devastated. Now at least he has the groupies to keep him company—until a blast from the past rocks his world.

Callie Talbert hasn’t seen her sister’s ex since high school. But after Callie bumps into Jared while she’s grocery shopping with four-year-old Logan, there’s a spark that wasn’t there before. Jared quickly realizes that her deaf “son” is the same age his own child would have been. When Jared demands to know more about Logan, Callie panics. There are things she just can’t tell him. Besides, Jared’s a bad-boy rocker, not a dependable father figure. He’ll move on to his next gig soon enough . . . right?

Trouble is, Jared refuses to be pushed away, and the more quality time he spends with Logan, the more he’s captivated by the woman Callie has become. When the truth is revealed, Jared only hopes that the three of them have what it takes to become a real family. 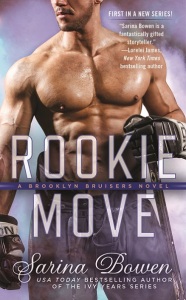 Hockey player Leo Trevi has spent the last six years trying to do two things: get over the girl who broke his heart, and succeed in the NHL. But on the first day he’s called up to the newly franchised Brooklyn Bruisers, Leo gets checked on both sides, first by the team’s coach—who has a long simmering grudge, and then by the Bruisers’ sexy, icy publicist—his former girlfriend Georgia Worthington.

Saying goodbye to Leo was one of the hardest things Georgia ever had to do—and saying hello again isn’t much easier. Georgia is determined to keep their relationship strictly professional, but when a press conference microphone catches Leo declaring his feelings for her, things get really personal, really fast….

She’s good at achieving her goals…

College senior Sabrina James has her whole future planned out: graduate from college, kick butt in law school, and land a high-paying job at a cutthroat firm. Her path to escaping her shameful past certainly doesn’t include a gorgeous hockey player who believes in love at first sight. One night of sizzling heat and surprising tenderness is all she’s willing to give John Tucker, but sometimes, one night is all it takes for your entire life to change.

But the game just got a whole lot more complicated

Tucker believes being a team player is as important as being the star. On the ice, he’s fine staying out of the spotlight, but when it comes to becoming a daddy at the age of twenty-two, he refuses to be a bench warmer. It doesn’t hurt that the soon-to-be mother of his child is beautiful, whip-smart, and keeps him on his toes. The problem is, Sabrina’s heart is locked up tight, and the fiery brunette is too stubborn to accept his help. If he wants a life with the woman of his dreams, he’ll have to convince her that some goals can only be made with an assist.

Here’s what you need to know about me — I’m well-off, well-hung and quick with a joke. Women like a guy who makes them laugh—and I don’t mean at the size of his d*ck. No, they want their funny with a side of huge… not to mention loyal. I’ve got all that plus a big bank account, thanks to my booming construction business. Yup. I know how to use all my tools.

Enter Natalie. Hot, sexy, smart, and my new assistant. Which makes her totally off limits…   Hey, I’m a good guy. Really. I do my best to stay far away from the kind of temptation she brings to work.

Until one night in Vegas…   Yeah, you’ve heard this one before. Bad news on the business front, drowning our sorrows in a few too many Harvey Wallbangers, and then I’m banging her. In my hotel room. In her hotel room. Behind the Titanic slot machine at the Flamingo (don’t ask). And before I can make her say “Oh God right there YES!” one more time, we’re both saying yes—the big yes—at a roadside chapel in front of a guy in press-on sideburns and a shiny gold leisure suit.

But it turns out what happened in Vegas didn’t stay in Vegas. And now, my dick doesn’t stay in my pants when she’s around. I try to resist. Honest. But the more we try to keep our hands to ourselves, the more we end up naked again, and the more time I want to spend with her fully clothed, too.

The question now is…do I take this woman to be my ex-wife?

5 thoughts on “Mark Your Calendars- September!”